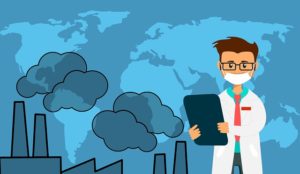 At the present time, it is a well-known fact that air pollution is considered to be one of the reasons that lead people to a slow death. According to the World Health Organization, poor level of air quality caused by air pollution (both outdoor and household one) is responsible for the deaths of about 7 million people every year, while 9 out of 10 people worldwide breathe the polluted air.

Nevertheless, it should be noted that air pollution affects not only physical but mental health. To be more precise, dreaded air quality is messing with the sheer wiring of the human brain. According to recent studies, high levels of air pollution may promote the increase of mental health condition risks such as depression, drastically influencing the cognitive abilities and even causing to an increase in the crime rates.

Therefore, it is planned to use the levels of air pollution as a way to keep under observation the crime rates in the nearest future. The study was conducted by the London School of Economics and revealed that a high level of chronic air pollution levels may have a significant impact on cognitive condition in people.

The most surprising fact of the study is the connection between minor crimes (for example, shoplifting and pickpocketing) and the poor air quality caused by a high level of air pollution. For example, researchers establish that the increase of crime rates in London by 0.9 percent happens simultaneously to the increase of Air Quality Index (10 points up). Moreover, the Air Quality Index of above 35 points results in a 2.8 percent increase in the crime rates.

The main reason for the connection between the level of air pollution and criminal offenses is the creation of cortisol stress hormone when people are under the influence of chronic high levels of air pollution. This study plays a crucial role because earlier there was an opinion that air pollution provides negative effects only on physical condition, including respiratory diseases like asthma and chronic cough, not the mental problems.

Herewith, numerous current researchers prove the fact that chronic exposure to certain microparticles present in the polluted air contribute to bad social behavior, for example, theft, vandalism, and even cheating. It was also established that one of the most dangerous air pollutants PM 2.5 can destroy the brain’s structure, resulting in the promotion of delinquent behavior.

Finally, the study allows us to understand that the harmful effects of poor air quality are not so obvious as it has been considered before. Moreover, air pollution control is highly required.  If you search the best air treatment device to improve air quality, you can buy a high-tech completely new type of wet air scrubber – a Multi-Vortex wet air scrubber produced by Optromix company.

Optromix is a fast-growing vendor of wet air scrubbers. The multi-vortex scrubber can remove gas emissions, dust, vapors, and other pollutants from a gas stream.  It is an innovative technology created to save water that makes it more cost-efficient and differs from other types of scrubbers.  If you have any questions or would like to purchase a multi-vortex wet air scrubber, please contact us at info@optromix.com