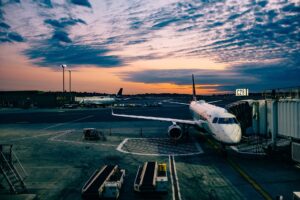 Each year air pollution control organizations pay more attention to the air treatment problem. Health and environmental specialists have concerns about people’s health protection. The air that contains high rates of particulate matter is considered to be dangerous for people especially for those who have respiratory and heart diseases.

Many people know about the air quality concerns as a result of wildfires and emissions from vehicles and industrial sectors. That is why scientists develop new special air pollution control devices, for example, wet air scrubbers that aim to capture particulate pollutants and remove them from the air. So they prevent harmful gases from reaching the atmosphere. The other method is government and air pollution control organizations’ programs on reducing air pollution rates.

However, it turned out that aviation is one of the main air pollution causes. According to the statistics, aviation emissions cause 16,000 premature deaths a year all over the world. That is much more in comparison with the land vehicles’ contribution and significantly affects the degrading air quality and climate change.

When airplanes reach cruise altitude, they release steady streams of suspended oxides into the atmosphere. These oxides, especially nitrogen, produce ozone and fine particulate matter as a result of chemical reactions with oxygen. These toxic nitrogen oxides are known mostly for causing asthma and cardiovascular diseases.

That is why scientists had an idea to solve this air pollution problem for aviation. They developed a sample of an airplane that has the ability to reduce emissions by 95 percent. The airplane was designed based on the heavy-duty ground vehicles principle that has post-combustion emission control systems. These system types get and eliminate particulate pollutants in exhaust gases by special catalysts. And scientists designed a similar air treatment system but for an airplane.

Still, it was a problem to install any air pollution control device under an aircraft’s wing because there is a jet engine with a gas turbine. Every part is placed there so precisely that any other additional device would ruin the flight aerodynamics. However, the design project produced by the scientists changes everything by placing gas turbines and a generator inside the aircraft’s cargo hold.

According to the developers, this is a potential method of solving the air pollution problem and reducing the emissions from the aviation sector. The whole air pollution system requires space in the cargo hold and a little more fuel to fly. That would be better in comparison with the electric airplanes’ designs where there would be many tonnes of batteries on board.

The next aim of the research team is an aircraft that would produce zero rates of emissions like particulate matter that can change the climate and affect people’s health. The current air pollution control device is good at effective aviation’s air pollution problem elimination. However, scientists still need to work on the climate impact.

Air pollution in KolkataThe raise of PM 2.5 levels due to the wildfires in Canada